The 2015 Telstra Store Albany Junior Wavefest has been run and won at Mutton Bird and thanks to all you frothing groms, it has been one of the most successful events yet. It took over seven hours of surfing to crown our Champs and we had a whole bunch of groms get invloved in the all new, non-competitive, 'rookie' division. It was great to see all your rookie faces beaming. Participation, progression, fun and building friendships around the ocean are what we are all about so we are stoked to have you guys on board.

We had Cylone Olwyn messing with the forecasts and threaten the weekend but luckily it proved to be a bit of a fizzer as far as the South Coast was concerned. Instead of extreme winds, driving rain and thunderstorms we were served with some fairly pleasent conditions considering. Waves a little on the small side perhaps, but you won't hear many of the micro groms complaining about that.

Competition was fierce in all divisions. In the under 14 and 16 boys we sawÂ  Ewan and Jacob jump straight into their double act with some great surfing. The other guys weren't too far behind though, with Seth, Griffo, Adam, Dane, Flinders, Jac and Zachary nipping at their heels. With another year under their belts I am sure we are going to see this group of guys all contending for the silverware and goodies bags. There was no lack of passion amongst the girls either. Their heats were hotly contested and it's amazing to see how they have progressed over the last year. Pemba and Sascha were busy pushing the limits of their wave counts, digging their rails and thowing some spray. Evie and Lily didn't quite get the right waves they needed to make their surfing shine like we know it can. No one does wave count like Olivia Mason and I think I saw her catch more waves than the average person does in a year. Well done to Holly who was savvy in the line up and congrats to Summer who stepped it up a notch and put Holly and Pemba on notice for the future.

It's pretty exciting to see the younger age divisions giving it a red hot go. Jack D, Jack K, Zen and Noah were looking pretty serious. Definitly a bit of ambition in this group and no doubt we'll see their surfing come on in the future. Did anyone notice the steely stare in Talia's eyes? This girl is focused. She even bagged her dad on wave choice during the push in event. John you need to lift your game. Lily Kuret was amongst it, slowly creeping further out the back and it was good to Tyce, Sapphire and Zen along - surfing talent obviously runs in the Shepherd blood. I know Sapphire left with a bag of medals and a show bag on her first campaign.

The manouvre of the day must surely go to Lucas Ross, pulling off this unbelievable air dismount with full rotation and helicoptor legs. He did it with complete control, so innovative I am not sure the judges knew what to do with it.

Congratulations to all our 2015 Â Telstra Store Albany Junior Wavefest and Club Champ Winners and placegetters. Lot's of effort and passion has gone into everyone's improvements and you should be stoked with where you have all come whether your results have met your expections or not. You all rip. Lucas, Noah, Oliver, Freya, Louis, Campbell, Jack and Lily K, Indigo and Maeve - push in and rookies rule. Keep up the good work and hopefully we'll see you all back next year.

Keep your eyes and ears out for boys clinics, more family surf days and the girls surf camp. Keep checking back to stay in the loop.

Thanks Sam and Lachy for all your help and showing all the younger groms how it's done. 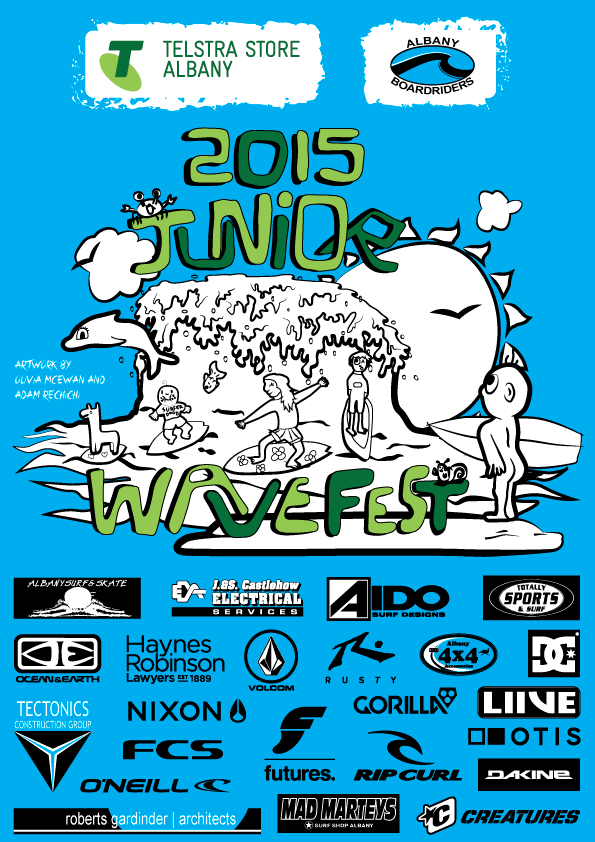