Congratulations to our 2017 Wavefest Champions. 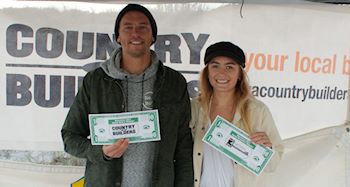 This year's 20th edition of the Albany Boardrider's Wavefest attracted a small, but stacked field, filled with talent and previous Wavefest Champions. The 20th Anniversary also earmarked the first year that we had equal prize money for the Open Men and Women's event thanks to the support of all our event sponsors including main sponsors WA Country Builders and Davynka Moss from Moss Conveyancing. "The girls train hard and put in just as much work, if not more than the men, so I was keen to see them get equal reward for their efforts", said Davynka.

In the end 2003 champ Reiss Hunt made the best of the great conditions we had on offer all day to take out the Open Men's Division. He had to produce some steller surfing to hold off Matt Stadler (2nd), Paul Tarbotton (3rd) and Robbie Mabbs (4th) in the final. Reiss' vertical attack was spraying fans all day showing why he was keen to make the trip from Sydney for this year's event.

Emi Campbell has been honing her skills in QS events this year and showed her class to take out the Open Women's division. It wasn't all smooth sailing as she had to progress through the repocharge round after Pemba Spargo got the better of her in the first round. Emi prevailed in the final (her 5th Wavefest in a row I believe) with Evie Dupuy bringing her recent Junior State Round form to take 2nd from a very consistant Sascha Roberts and Pemba Spargo in fourth.

Robbie Mabbs had his flow going to win the 35 and over Men's final on his way to racking up 7 heats over the day which should be an award in itself. A very close tussle between Darryn Oostdam (replaced Damian Rathbone after withdrawing from an injury sustained the day before) and Dave Beeck saw Dave sneak in for 2nd and Darryn 3rd while Matt found it tough to find the waves he needed rounding out 4th. The 45 and over Mens division read like a previous Mens Open winner's list as Paul Dupuy had his trademark shralp in action to win and another tight finish between second and third saw Adrian Shepherd sneak second in ahead of Paul Tarbotton in third. Gary Connell rounded out forth place who was overheard saying, "I found it hard to get going without having to deal with Minter's trash talk in this year's event". We did expect a few more takers in the 30 and over women's division but that didn't stop Karina and Davynka battling it our fiercely with the eternal grommet and charger, Karina Mitchell, getting the wood over Davynka Moss in their two finals.

Once again a big thanks to everyone who contributed to such a good day. Thanks also to all of the sponsors who have contributed to this event and the club over the last 12 months. Events like this wouldn't be possible without your support. With a bit of cash and great prizes on the line it's always great to have an experienced and impartial head judge to make sure everyone is thinking about the scores they are putting down. Thanks again Charlie Gallagher for coming down to do this, it's always a pleasure to have you around and we appreciate the experience you bring to the panel.